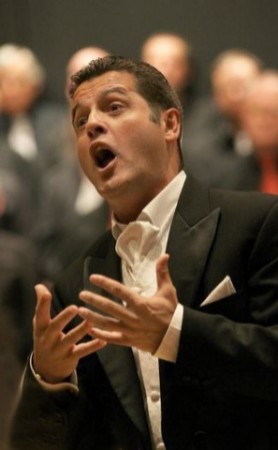 He was awarded 3rd prize of the VIII Lirico International Competition A. Catalani chaired by Leone Magiera.

He is a consummate specialist  for singing in full voice the overtones and his magnificent staging, from the role of the roasted swan (Der Schwan) in the world-famous Carl Orff cantata, Carmina Burana. This role has been interpreted in more than 200 times, in Madrid, Palma de Mallorca, Stuttgart, Graz, Cologne, Innsbruck, Bilbao, Frankfurt, Zürich, Monterrey, Salzburg, Hamburg, Mexico D.F, Berlin …

The figure of the Swan (Der Schwan) in the Carmina Burana is of special relevance.

Carl Orff composed a very sharp aria for tenor with extremely  notes … 3 x c5, 3 x d5 and 9 X Si4 … all composed of three strophes. Orff thought and wrote the aria for a tenor (not a countertenor who sings in falsetto). In 1937 (year of composition of the work) the figure of the countertenor in the world opera scene had not yet resurfaced. It was the English countertenor Alfred Deller who rescued in the 1940s (later to the composition of the Carmina Burana).

… and tenor Joaquín Asiáin shone as a „fried“ swan with full voice in the very highest tessitura. A pleasure!

Asiáin made from the lamento of the fried swan in the pan a vocal and actorically convincing piece of cabinet.
By Christoph B. Ströhle – Reutlinger General Anzeiger – 10.3.2015

The spanish Tenor Joaquín Asiáin fascinated in his role as a fried swan. He did not use his hands to keep the notes, but with powerful gestures underlined and illustrated the text.
By Wenzel Hübner – Rhein Neckar Newspaper – 31.07.2013

The soloists … and Joaquín Asiáin did not have an insignificant part. Above all, the latter struck with his unusual tenor, he can achieve incredibly high tones.
By Katja Grieser – East Thuringian newspaper – 22.06.2009

Tenor Joaquín Asiáin gave the fried swan so convincingly that one could almost smell the crispy ribs.
Porz – Online.de – 26.11.2008

The Spanish tenore di grazia Joaquín Asiáin has a not very frequently heard voice in Monterrey. Its timbre of light texture and unbelievable ease for the high tessitura combined with an impressive scenic capacity, is considered a treat for the connoisseur.
R.Tischavsky-Millenium N.L – Monterrey -10.03.2007